Unify the three races, Psy, Human, and Changeling while still respecting their differences and unique composition. It’s a first step towards a potential United Earth Federation.

The Trinity Accord allows for the rapid sharing of data across signatory groups, and for the formation of mixed teams to deal with issues that affect more than one race.

The aims of this agreement are to foster and maintain stability, both in world markets and for the personal safety of individuals. It has also been termed the first step toward creating a permanent United Earth Federation. (Shards of Hope)

Psy, human, and changeling, all three races have agreed to work together to unite their divided world. The Trinity Accord is the fragile foundation of all their hopes and dreams of a future without war, without violence, without shattering loss. It is a noble ambition. But the past is not an old coat that can be discarded and forgotten. It is a scent that clings and clings and clings. That scent is of blood and betrayal and a chilling, emotionless Silence. The psychically gifted Psy seek to feel emotion for the first time in over a hundred years. Changelings with their primal hearts fight their natural instinct to trust only pack, only clan. Humans look to the future with a grim-eyed determination to no longer be the weakest race. And others . . . they seek to spread chaos and death and division. Welcome to the Age of Trinity.

A Test Run at Unity[]

The hope and plan is for a federation of all three races to grow out of this Trinity Accord. 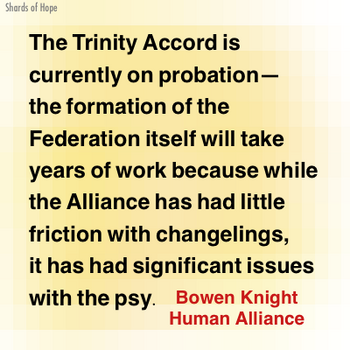 The Trinity Accord was signed October 2082 by leaders representing the three races, Humans, Changelings, and Psy, all working together in alliance to make a safe world for all.

The Trinity Accord grew out of the ashes of a tattered PsyNet and a pathologically infected Psy race, including insanity, chaos, and zombie-like mass murder. This infection and rot was a direct consequence of a century of emotional Silence, defined in the Silence Protocol and enforced by the Psy Council via The Arrow Squad. In the search for emotional silence, the council and the psy society as a whole attempted to stifle or sometimes wipe out all Empaths or Designation E. Without emotion, without empaths, the Psy race will eventually fall apart. Emotion and biofeedback from all three races makes for a healthy Net with untainted biofeedback, ensuring a healthier psy race.

However, bigoted organizations like Pure Psy and Silent Voices did their best to enforce Silence, despite clear signs of malignancy and rot. With fanatical zealotry, they sought to raise the psy race above the “dirty animals” and the “weak humans”. Others, including the Architect, sought to use the mass chaos to further their own personal goals for power and wealth. Some, like The Human Patriot, wanted the status quo, three races working alone, for their own ends.

Humans, changelings, and psy must work together to protect the planet from these bigoted, powerful, and ambitious groups. The three races are necessary to the well-being of the whole world. The three races combined form a trinity of strength and purpose, the Trinity Accord.

Attending the meeting Aden Kai called, to suggest the formation of this collaborative group, representing all races. Note that Ming LeBon is not included (Shards of Hope (book) ch 82)

Signatories to the Accord[]

At time of press, the signatories to the Trinity Accord were as follows: The Ruling Coalition. The Arrow Squad. The Empathic Collective. Over one hundred predatory and nonpredatory changeling packs, including the SnowDancer wolves, the DarkRiver leopards, the BlackSea changelings, the StoneWater bears, the BlackEdge wolves, the SunGrass grazers, the IceRidge foxes, the DawnSky deer, the WindHaven falcons, the AzureSun leopards, the DesertRain lions, and the WaterSky eagles. Further signatories are expected. The Human Alliance. The Shine Foundation, as representatives of those who self-identify as part of the Forgotten population. Hope Light, a nonpartisan humanitarian organization. (Shards of Hope)

Community content is available under CC-BY-SA unless otherwise noted.
Advertisement